Join us as we peek behind the scenes of our upcoming anthology, ON TIME. Learn more about Donald J. Bingle in his featured interview.

Once I realized that thought was all electricity and chemistry, which means it is goverrned by unalterable scientific principles, the rest of the “science” of the story coalesced in my thinking. and I needed to come up with a story that could convey the consequences of that science.

Even though most lawyers never appear in a courtroom in a professional capacity, everyone assumes they do, which can be frustrating for their self-esteem. But that doesn’t mean they can’t be creative and clever in their own way.

That this isn’t a world I created, but just might possibly be the world in which we exist, oblivious to how it actually operates.

This is a legal drama about astrophysics, physical laws, and quantum physics. Sylistically, it’s a dialogue drama, not an action piece.

My dad really did tell me to make sure I got some courtroom experience even though I was a corporate/securities attorney.

That science fiction reflects science fact and that both have philosophical implications most people never think about.

The horror of realizing that astrologers might be fundamentally right even though they get all the details wrong. 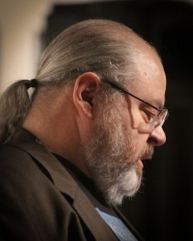 The first story of any consequence I remember was a story for school in my early teens about how sunflowers always faced the sun out of religious devotion.

No distractions. No music. No interruptions. I don’t even answer the phone. Caffeine and salty crunchy snacks fuel the brain.

I played tournament role-playing games (like Dungeons & Dragons), so I got used to speaking in character without hesitation, which helps with dialogue and with avoiding writer’s block. Since I also ran adventure scenarios from others, I learned a lot about pacing, plots, and clue-giving.

Times Roman. Every computer has it, so you don’t have to think about it.

My biggest recommendation is to keep writing and show your work to others and consider their comments. Sure, you can learn from lectures, but if you don’t practice your craft and submit it for evaluation to critics and readers, then pay attention to their reactions, it is not going to improve.

I like “somesuch” and “detritus.” It’s not that I use either more than once or twice in any one piece, but I probably use them more often than most other authors. Since there are literally thousands of words I have probably never used, it’s hard to pick a least favorite.

Donald J. Bingle is the author of six books and more than sixty shorter works in the science fiction, thriller, fantasy, mystery, horror, steampunk, comedy, and memoir genres, including Forced Conversion, about which Hugo and Nebula award-winning author Robert J. Sawyer said: “Visceral, bloody–and one hell of a page turner! Bingle tackles the philosophical issues surrounding uploaded consciousness in a fresh, exciting way.” He once also received an award for his “contributions to time travel.” He’ll really have to get around to making those contributions some day. More on Don and his writing can be found at www.donaldjbingle.com.

Check out the Kickstarter campaign now!