Join us as we peek behind the scenes of our upcoming anthology, ON TIME. Learn more about Benjamin Blake in his featured interview.

“Something in the Way” was heavily influenced by the Silent Hill series of videogames. An ordinary man, travelling to a quiet town in search of a missing love, and finding that something is terribly off . There is also a of Lynchian inspiration in how the story is executed. It jumps around a lot, in a kind of surreal dream.

Henry Beaufort is an everyday kind of guy, somewhere in his early thirties. He has a lovely wife and a sweet kid, and spends his spare time working on old guitar amps. He also holds a darkened, tragic secret close to his heart.

Surprisingly, I think it’s something that’s not terribly profound. For me, it’s the musical references found throughout the piece. Music plays a huge part in the story (the title obviously coming from the ending track of Nirvana’s Nevermind), and I really think that it gives the story a dimension perhaps not-so-commonly found in prose.

“Something in the Way” has the ominous quality found in weird fiction, but executed in an extremely visual style. The story had gone through many incarnations before it morphed into the version published in the anthology: from flash fiction, to radio transcript, to screenplay, and eventually the final short story. I truly think that it took some small part of its respective past lives with it in regard to style, tone, and execution.

I grew up playing Silent Hill and listening to 90’s alternative rock, so without that piece of personal history, the story would likely never exist. Also, the concept of lost love and its tendency to resonate throughout the years, is something I am all too familiar with.

A visceral feeling of displacement.

My favorite part of the story to write, was the rewrite I undertook before it was accepted. I was never truly happy with the way the initial short story was transcribed from the screenplay, and rewriting it in a style that was much closer to my heart, was a real treat. 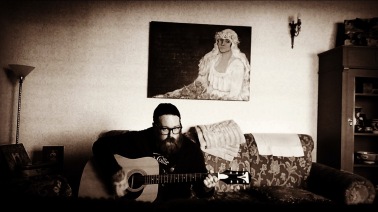 I was about five years old, and it was a story about a mouse, which I received an award from the headmaster for. It had something to do with cowboys, I think. Either way, one of the next stories I penned was an epic western that ran about ten pages long. I’m glad I grew out of that particular genre pretty quick.

Cigarettes, music, coffee, and to a lesser degree, the absence of other people.

Music. For me, everything came from music. Before I started getting published as a poet, I was scrawling out lyrics on paper-scraps (I wasn’t even in a band at the time). Everything went from there.

Times New Roman, 10 point. With no spacing after. God, writing this down makes me realize how OCD I am about that.

I have a couple of books, if those count. Zen in the Art of Writing by Ray Bradbury, and On Writing by Stephen King.

My favorite word is “cigarette” – probably because it’s borrowed from the French. My least favorite, is any text or Internet slang and/or abbreviations – people seem intent on killing the English language these days, and that’s something I want no part of whatsoever.

Benjamin Blake is the author of the novel, The Devil’s Children, and the poetry/prose collections, Southpaw Nights, Standing on the Threshold of Madness, All the Feral Dogs of Los Angeles (with Cole Bauer), Dime Store Poetry, and the forthcoming Tenebrae in Aeternum – to be published by Hippocampus Press in 2020. He lives in a small mountainside village in Abruzzo, Italy. Find more of his work at www.benjaminblake.com.