“Here it’s about…seventeen—maybe twenty feet. As we get closer to Canal Street, that number decreases. New Orleans is…was shaped like a cereal bowel. The Vieux Carré was built on the high ground before the levee system, better protecting the French Quarter from floodwaters. Problem is the city is constantly sinking, even still. Every year more and more of it gets swallowed up. Nothing can save it from the hungry swamp. Then storms kept coming, the lake and Mississippi River kept spilling over, and the ground kept sinking. They say in less than twenty years, even the Quarter will be totally submerged.“

Louis could not take his eyes off the submerged building, imagining bodies floating silent and graceful underneath the boat, like the betta fish Jenny kept on their kitchen counter. “Why did they ever build here?”

“Greed,” Ray said. “It was an inevitable city in an improbable location built on unstable ground as a port linking the center of America to the Gulf of Mexico. This waterlogged wasteland was once considered the jewel of the South.”

“How could something so important just fall?”

Ray snorted. “The storms kept coming. The damage got worse. America was splintering into the godforsaken piss hole we have today. Before fracturing after the Crash, the bankrupt government decided the city was better off sinking than pouring trillions into a lost cause. After all, war had come home.”

“People remaining in the city formed gangs and kept out any attempt at order that wasn’t their own. Since then the Swampies have done a decent job of killing each other off.”

Ray shook his head. “Doubt it. The real danger is Uptown, on the other side of Canal Street in what used to be called the Garden District. Lots of action there. The Swampies are still fighting over that old money. No, we’re sticking to the Quarter today. It’s safer than Uptown, but it’s still a cradle of weird. Guess in that sense nothing’s changed since the flood.”

Ray slowly piloted the airboat into the buildings. Excess wake slamming against the buildings would draw out unwanted attention from creatures or worse. Deeper into the labyrinth, the ground underneath was higher, elevating the tightly lined rooftops above the water level and creating a complex maze leading to Canal Street, former Downtown New Orleans. The fog thickened. An occasional crow’s call echoed through the flooded streets, and, once or twice, something splashed nearby.

“We’re outside of the Quarter,” Ray said. “When we hit Bourbon, we’re on the hunt. If you see a place you want to check or something interesting grabs ya eye, we’ll stop.”

After passing two submerged streets, Ray pulled the steering lever back and the airboat turned right, entering Bourbon Street’s narrow mouth. He slowed the craft even more. As the airboat passed, flotsam clinging to the buildings and crowding the canal bounced in the wake; a branch stuck in a wrought iron fence broke free and drifted towards Canal Street. Many of the windows were shattered, and broken strands of Mardi Gras beads dangled from what was left of trees and fleur-de-lis fence post tops tall enough to breach the surface. The waterline swallowed most of the buildings’ lower floors, but the second stories were dry.

“I like that one there, with the gallery.”  Peter pointed to an ironwork balcony supported from the ground by poles. “I think we can get up there and bust it open no problem.”

“All right. Peter, you climb up first. Louis, you’ll follow him. You two be careful. Sometimes there’s razor wire or broken glass on those galleries used to keep out pre-flood thieves and hobos. You don’t want to get cut out here.”

“Yeah,” Peter said, punching Louis in the shoulder. “Get scratched out here, kid, and you’ll leave more than your load in Jenny the next time you mount her.”

“I’ll watch the skiff,” Ray said, “and make sure we don’t get stranded.”  He patted the walkie-talkie on his belt. “But shout at the first sign of trouble.”

Ray steered the boat to the gallery’s support. Peter grabbed one of the posts and tied off the airboat. Grabbing the ironwork, he hoisted himself over the handrail. After climbing on, he jumped twice, testing the gallery’s strength.

Louis swallowed hard and scrambled up the ironwork. Slipping on the handrail, Louis saw the sinister water and panicked. He started to tumble, but Peter grabbed him and hauled him over.

“Easy there, twinkle toes,” Peter laughed. “I’m not swimming after you.”

“I—I—”  Louis steadied himself on the handrail.

“You two all right?” Ray called.

“Quit wasting time up there, boys. Sun’s gonna set, and I don’t want to be out here after dark.”

Peter gave Louis a little push. “You heard him, let’s pop open this tomb and see how she smells.”  When a shattered glass door on the far end of the gallery wouldn’t budge, he smirked and kicked through with his steel-toe boot. He extended an arm to Louis, waving him in. “Baptism by fire. Ladies first.”

Louis held his breath and stepped into the darkness. The overpowering mold and sewage stench enveloped his senses as he cracked a long glow stick; it burst alive, radiating neon green. Behind him, Peter cracked another, and combined they provided enough illumination to begin scavenging.

“Looks like this building was once a house, not some dive bar,” Peter said. “Look for bedrooms—sometimes you can score antique jewelry or vintage clothing. If you find any unopened liquor bottles, grab ‘em. They go for big credits onshore.”  Peter looked around the room. “You know, it’s funny.”

“What’s that?” Louis asked as he poked around a leaning bookshelf.

“Back on the mainland, people are fighting each other just to eat, to keep roofs over their heads, and we’re in this toilet, grave robbing so some rich asshole can show off to other rich assholes. If no one ever told you life’s a sick joke, here’s the punch line, kid. Us.”  Peter opened a desk drawer and smiled. “Jackpot.”

Peter waved a stack of magazines in the air. “Nudie books.”

Louis chuckled. “You’re not serious are you?”

“Hell yeah, I am. After riding around with you two jokers all day, these lovelies will help clear my mind.”  Peter rested them on the desk. “Let’s check that hall. Think I see some light.”

Leading the way, Peter walked the narrow hall until it opened into a large flooded courtyard surrounded on all sides by narrow arcades decorated with intricate ironwork railings. Against the back wall, slimy green algae covering the crumbling red bricks rose several inches above the waterline, marking the rise and ebb of the polluted water’s tides. Withered trees reached for salvation, their crooked fingers laced with dangling beads lined the railings. In the courtyard’s center, the top of an ornate, cement water fountain protruded from the stagnant, brown water. Several mildewed statues stared emotionlessly at the intruders.

“Looks like a winner,” Peter said, pointing towards one of the effigies, a woman with flowing hair that covered her bare breasts with her left arm. “She’s probably heavy, but I ain’t afraid to drag her up. Probably worth beaucoup credits. I think she’s close enough to the railing for me to reach.”

“I think it’s too much. How are we gonna get her on the boat?”

“Watch a master, kid.”  Peter hopped over the rail in one effortless motion. Reaching towards one of the trees, he snatched a purple strand of beads from the limbs, snapping the branch in the process.

“Show me your tits.”  He tossed the beads at Louis, missing his target by several feet. Peter almost lost his balance but steadied himself with a heel against the rail. “Take those home to the missus. She’ll blow ya for sure.”

“I want to get her real jewelry. Make it official.”

“You’re so damned negative all the time. We’ve been living together a while, and it’s good.”

“Shacking up is totally different than marriage.”  Peter reached out, but the statue was just beyond his fingertips. He sighed. “You marry her, and her parents will start visiting all the time. They’ll be all up in your shit, telling you how to live your life.”

“Her parents died in the Fifth Wave,” Louis said. He held her as she wept that night.

“We’ve all lost people,” Peter said. “That’s why it’s better not to get attached.”

Peter huffed pulled back and realigned his footing. “I don’t know who lied to you, but this world wasn’t built for love.”

Louis cringed at Peter’s stubbornness. Arguing with the man was useless—he was as stubborn as he was slow in an airboat. Bending over, he scooped up the Mardi Gras beads and shoved them into his pocket.

Peter reached out again. Adjusting his footing worked. He leaned over and rested his palm on the statue’s head. He looked back at Louis and smiled.

“Keep your Jenny. I know who will be in my thoughts later when I retire with that literature I found.”  He wrapped his arm around the statue’s neck and tried to lift her up. “Damn, she’s a tough broad.”

“Look, not another word outta—”

The murky water underneath Peter erupted. A large alligator sprung up like gray-green lightning, grabbing his torso with a hiss and glistening white teeth. Peter’s ribs crunched inside the gator’s massive jaws. Screaming, Peter lost his footing on the rail. His body swung with the gator’s weight, but Peter, arms hooked around the indifferent cement stare, would not release the statue. The gator started rolling, bisecting Peter with more crunching and tearing before vanishing in the dark water with the lower half of the man’s body. 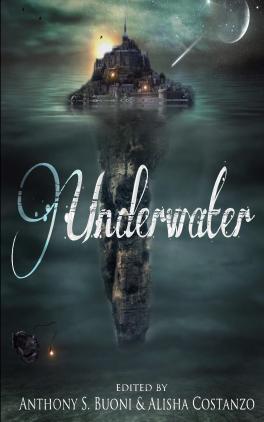 Living and creating in New Orleans, Louisiana, Anthony S. Buoni haunts the swamps and bayous along the Gulf of Mexico, writing, editing, producing, and lecturing about his craft. A practicing pagan, he’s responsible for the BETWEEN THERE anthologies, his screenplay-novel, CONVERSION PARTY, and his new collection of short stories, OSSUARY TALES. Recently, he’s co-edited and co-produced several exciting anthologies alongside Alisha Costanzo with their independent imprint, Transmundane Press: DISTORTED, UNDERWATER, AFTER THE HAPPILY EVER AFTER, ON FIRE, and TRANSCENDENT.

In the past, he has produced the underground zine MEOW and the illustrated horror rag OUTRÉ from Meow Press, and his work has appeared in WATERFRONT LIVING, NORTH FLORIDA NOIR, and SMALL HAPPY. Currently, he’s writing a New Orleans monster novel as well as putting the final edits on novels featuring ghosts, zombies, and a café between life and death filled with secrets and philosophy.

When not writing, Anthony poses as a Bourbon Street bartender, underground musician, and DJ, drawing down the moon with new wave, trance, and melancholy tunes. Other interests include film, gardening, comic books, and playing video games with his son, Fallon.