I’ll go now to the well. That’s next, like every day. Water no less wet that William’s gone, and drinking no less necessary that no pleasure gives. That plate there on the sideboard needs a rinse and, too, the spoon, like every day.

Tiarella takes the two oak buckets and their yoke from the low shelf beside the door. They seem so heavy, although they hold no water yet. Not quite like every day. The forest canopy is thinner with loss of leaves. The still, brown autumn air, “like stale bread,” William would say, his favorite snack an old crust dipped in beer.

“Tee-yah.” Above the trees a circling hawk cries out. “Tee-yah.” Almost like William’s voice calling her name, charged with excitement at some novel find.

She searches for signs of him. The axe rests where he left it beside the splitting stump. His heavy leather gloves hang like some dark animal on the post, the woodshed unfilled. All as it’s been for several days.

A small gray bird patrols the pile of logs.

Unbroken stillness everywhere but there.

The vesper marks the Changing. After sundown, the far hills will bloom with great fires as folks there match the coming cold and dark with light and heat. In past years, she and William climbed to where the rocky outcrop cleared the western trees to watch the far-off flickering display, fire heaped upon fire on hill heaped upon hill. Folks say it is a time when between this world and the other…

Is that where William is…? The other? A sudden gorge of sorrow clamps her throat as if a claw gripped her there.

She leans against the lichen-matted stones circling the well and squints against a tear. They first spoke at her mother’s well, William there to leave a tool he’d fixed.

What tool? She can’t recall more than a vague, long shape in deep-veined hands.

The words were nothing, ordinary things: she, offering a drink; he, grateful, praising Mother’s cherished well. But even then, she knew that he’d return, and she’d be there to greet him. So, they were, like water mixed with water, until now.

Her tear falls into blackness as she leans into the task of drawing water, cool and clear. The dancing surface sparkles as thin sunlight slants beneath the high-limbed trees, while in the east, a gibbous blotch of moon adorns the sky. She heaves the laden yoke upon her back and wraps her wrists into the ropes. Her gaze drops to a verdant swath of lowly plants that seem to gleam a mineral gleam against the brown, leaf-matted forest floor.

I haven’t been myself to miss a thing so green in this brown time.

Like all thoughts, this one swings back to him.

Nagging sorrow drags her shoulders down more than the weighty water as she shuffles up the stony path. Once the buckets are inside, she steps out to see the green anomaly. A sudden breeze stirs up autumnal litter from the yard. Her hand goes to her throat to close her vest against the gathering chill.

She kneels beside the plants that stand in a clump next to the path. They number no more than half a dozen—hardy, upright, defiant of the cold. Two basal leaves on slender stalks are crossed by smaller leaves further up, each leaf a tooth-edged tear. From the last pair rises a spike of tiny, drooping, bristled fruits topped by a white two-petaled flower, framed upon a stand of darkened, curled sepals, the whole no higher than a person’s knee.

Tiarella begins the chant of harvesting. Apology and praise and lyric thankfulness wheel through the simple verse, as her fingers probe the earth around a single plant’s green, swollen base.

A liquid rush above her head shakes her spine.

Then a scream ignites the air as if the plant, uprooted, cried out.

Overhead, a vine hangs like an unwound snake and pendant, like fruit, a jay. Its shrieks come out like water coursing from a jug. The hawk hangs head down, one talon gripping the jay’s throat while the other is lost amidst a riot of writhing feathers.

A spasm of horror roots Tiarella to the ground then dissipates like smoke. The hawk’s clear eyes offer no coldness, no dark, malignant strength, but a sufficiency, a warm and beating purpose, an answer, had she asked: “This is my sustenance. These screams are part of his world. His flesh is part of mine.”

The struggle shrinks to just the jay’s enfeebled voice, the hawk and Tiarella still as stone.

A gust of wind breaks like a wave against her back.

It heaves itself above the jay, there, as if by force of will, to see the jay abandon its doomed grip upon the vine.

They drop like death before her, then the hawk and its burden assume a ponderous, awkward flight, half airborne, half dragging on the earth until at forest’s edge, they come to ground. The jay is stilled beneath a canopy of brown-streaked wings.

The hawk’s gaze strokes Tiarella once again before it turns back to its task. 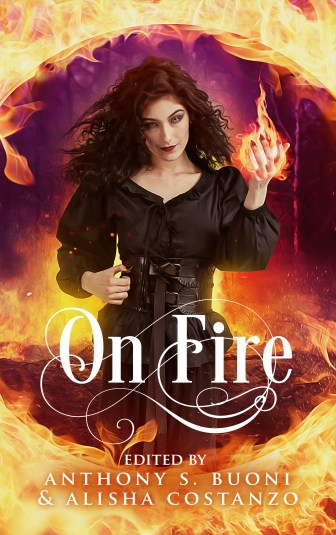 J. Lee Strickland is a freelance writer living in upstate New York. In addition to fiction, he has written on the subjects of rural living, modern homesteading and voluntary simplicity. His work has appeared or is forthcoming in Sixfold, Atticus Review, Scarlet Leaf Review, Workers Write!, Pure Slush, Mad Scientist Journal, Newfound Journal, Jenny, and others. He is a member of the Hudson Valley Writers Guild and served as a judge for the 2015 and 2016 story South Million Writers Awards. He is at work on a collection of connected short stories vaguely similar in format to the long-defunct American television series ‘Naked City’ but without the salacious title.

Get your copy of ON FIRE!