Delilah has developed a fetish of the human-who-was-once-an-amphibian variety. Her predilection has progressed into a full-fledged addiction as three or four times a week, the door to our flat bursts open and a new prime specimen drips pond water onto the Ikea rug in the foyer.

Delilah wears a proud smile and clings to their arms, bright with infatuation, gleaming with accomplishment. After all, her rose-pink lips elicited their transformations. And they are all hers, rescued from the muck and ever-grateful to their savior.

Each specimen is distinctly different, but they all are ambitiously handsome. Last week, Delilah’s first catch was Italian. Olive skin, dark, emotional eyes, clothing that only a European can get away with wearing. He was young, so he was probably an exchange student. Her second catch looked like a lumberjack, a man with a full beard, bulging muscles, and enough freckles to create a connect-the-dots coloring book. I half-expected him to produce an axe to cut the lasagna they shared that evening. The third was an older Russian gentleman who moved with innate bravado and had the saddest blue eyes. He didn’t speak a lick of English, but Delilah didn’t care. She took him to bed anyway, as she does with all of them.

The next morning, she kisses them goodbye. When they’ve reassumed their froggy countenances, she affixes their legs with a little gold band. It helps her to determine which frogs she’s already romanced. Then, out the door and back to the park they go, as if nothing ever happened.

I’ve lost track of the number of suitors that have come through our door and dampened our rug. Does Delilah know? Does she keep track? Does she delight in her growing number of conquests?

And if she does, is my name at the top of the list? Does she fondly remember me as her first? Or does her lack of lust and passion for me exclude me completely from the ranks?

I’d resigned myself to an amphibian lifestyle the morning I met Delilah. I’d been a frog for nearly a year, the result of a tumultuous breakup and a vindictive ex-girlfriend who decided to teach me a lesson. When she threw me into the lake, a note full of expletives, blaming, and mentions of voodoo followed me.

At first, I thought someone would figure it out. My parents ordered a police investigation, but the ensuing search proved fruitless. You don’t leave a trace when you recede into a local pond. No cell phone records. No credit card transactions. People say you were completely normal the last time they saw you. And, of course, the woman responsible for the hex isn’t going to have a change of heart. Especially when you cheated on her—not one of my finest moments.

As the missing person posters shriveled on lampposts around town and were eventually replaced with the face of some other unlucky guy, I decided I’d make the most of my new life. After all, I’d always enjoyed the outdoors, I’d become an exceptional swimmer, and while I missed a choice cut of sirloin from time to time, I developed a taste for bugs.

While gathering breakfast one morning at the community park, a net dropped over me. I panicked. I jumped; I kicked; I squirmed, but then my little heart raced far too fast, and I grew heavy with exhaustion. I looked up, expecting to see a mean-spirited little boy, the kind that would subject me to light filtered through a magnifying glass.

Through the mesh, a pair of feminine brown eyes gazed down at me. A girlish grin lit up my captor’s face. And wouldn’t you know it, it was nice to receive a smile for once.

I didn’t struggle as Delilah scooped me into her palms and said, “Gotcha.”

The internet is a crock of shit. I can find support groups and rehabilitation programs and intervention specialists for some crazy things—people who eat the ashes of their loved ones, Satanic cultists, teenagers who sniff glue to get high—but I can’t find anything for sex addicts that use magic to ensnare, manipulate, and then re-enchant their lovers. The lack of resources is maddening.

I’ve done some medical research, too, trying to discern if Delilah has some kind of health condition that gives her lips transformative powers. Could this be genetic? Some insane recessive gene? But I’ve found nothing.

I’ve reached out to local government to express my concern in the recent surplus of frogs in our neighborhood. A state representative emailed me back saying that while he understood my annoyance, the increase in amphibian life in nearby ponds has proved ecologically beneficial. A rare species of fish, recently deemed on the cusp of extinction, now flourishes in ponds and lakes around town.

Since my ex mentioned voodoo in her departure letter, I’ve been trying to track down dark magic shops in the area, but my searches are spotty and uninformative. Apparently, none of these niche businesses are too concerned with having a web presence. I’m sure they rely on word-of-mouth marketing to keep them in business. “That son of a bitch cheated on you? Well, there’s this place you can go to get a potion that’ll turn him into a dog. Literally.”

My search is frustrating, but I understand how widespread, traditional marketing would pose a safety concern. A plague of frogs would likely descend upon the shop, if only the poor schmucks knew where it was. 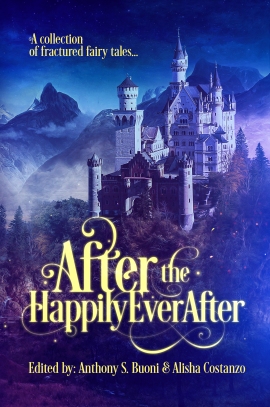 Tiffany Michelle Brown is a whisky enthusiast, archer, Aikido practitioner, and writer who lives near the sunny beaches of San Diego, California. She’s easily amused by puns, sexual innuendo, and anything otherworldly or magical. Tiffany has published short stories with Liars’ League NYC, Popcorn Press, Line by Lion Publications, and Shooter Literary Magazine. To follow her adventures, subscribe to tiffanymichellebrown.wordpress.com.

Get your hands on this magical collection today!