Four years ago, I began writing about the world, Flidais, for my Elemental Affinity series. It’s a little like our Earth, but Flidais is remarkable because in times of trouble it grants elemental powers to a chosen few to save humanity and ultimately, the planet itself, from her inhabitants’ destructiveness. While writing this epic science fantasy story, I quickly discovered that not only did Alliance need two more books at least, but it needed a prequel that explained why Flidais harnesses this magic to only reveal itself when it needs it most. And yet Chaos, the current working name for this prequel, really only tells part of the origins of elemental magic on Flidais. It explains how and why the people who descended from sylphs, sprites, dryads, and nymphs surrendered their elemental power to their planet’s care, but not necessarily how they came to possess it in the first place.

Enter Promethia, a sylph who doesn’t quite know her place within the sylph kingdom in regards to controlling the wind and storms. Hers is a story loosely based on the Greek tale of Prometheus, but instead of the elements of clay and fire; Promethia grants her world with her gift of air as a life-sustaining force.

The other elemental magics encountered in Promethia are the Dryads who look after the flora of the forest and the nymphs who live in the streams and oceans, they practice earth and water elemental magics respectively. The fire sprites who celebrate the rites of the solstices and equinoxes also manage their fires and volcanoes for new growth purposes. While they do not appear in Promethia’s story, their influence has a major role in Chaos, the prequel to the Elemental Affinity series. 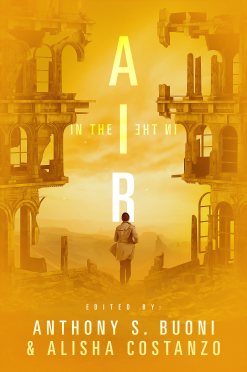 Kelly J. Massey is an adjunct writing instructor for Montana State University and a novelist searching for a publisher. When she isn’t writing, teaching writing and rhetoric, or grading papers; she can be found hiking and fly-fishing with her family in southwest Montana. Her writing companions also include a goofy Labweiler, and two cats who only want attention when the laptop is open. In 2017 she had two short stories published, a twisted fairy tale, “Red: Mercenary for Hire,” and a dystopian science fiction piece, “Back Home.” They appeared in the Fairy Tales and Folklore Re-imagined anthology and the Like A Woman Anthology, respectively.

Get your pre-order copy now, while it’s on sale!