On the verge of a new anthology, we are celebrating IN THE AIR with a behind the scenes view of authors and their stories. Here’s a look at Rohit Sawant and his story “The Harmonica.”

My story is about a guy who buys a harmonica on a whim, and he grows passionate about playing the instrument to a degree where he feels a bond with it, but later he’s compelled to give it away because of a hasty promise, and things get weird. It takes place in a mundane everyday setting which acts as a foil to the uncanny element.

The characters almost always emerge later for me, and that was the case with this story, too. I was browsing Amazon for a guitar capo when I fell into the hole of related items and came across a harmonica, and it reminded me of the one I had as a kid (and never learned to play). I didn’t think much about it then but weeks later a “what if” plopped into my mind out of the blue, and the story unfolded from there the more I prodded it.

During the first draft, I explored a scene from Ray’s, my main character, childhood where he and his brother are rooting about the attic, and later in the scene, Ray gets electrocuted while screwing on a light bulb. While it didn’t make it into the final draft, it offered some insight into his relationship with his brother who briefly appears in the story.

On the surface, it’s a low-key dark fantasy piece, almost like a character study, but I also wanted it to be a metaphor for belonging and the inability to let go, and how a change in context can turn something once beloved into something you dread. 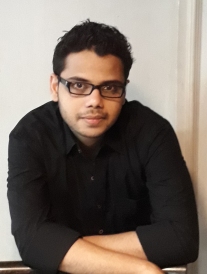 I spend a lot of time trying to catch up with my To Read list, and it doesn’t help that I’m a mood reader and often reread some favorite stories. Aside from that, squeezing in time for the thousands of podcasts and newsletters I’m subscribed to, and crossing things off my Watchlist. I’m currently working on making a short film so that’s fun. I was going to add working out, but I like having worked out instead of simply being fond of said activity. Spending time with my family and daydreaming about having a cat.

Trying not to get in your own way and letting the characters lead you.

A combination of a riveting idea and characters. A great idea can be a kick off point and grab the reader’s attention, but it can only go so far without engaging, not necessarily likeable, characters to keep them invested throughout the story. Also, pacing can make a huge difference when it comes to keeping people engaged. If the pace drags, what with the million distractions at our fingertips, you risk losing the reader to the bottomless pit of social media or some other thing.

Gosh, I think a whole bunch of things. Either joining the Navy, where my dad worked, or a comic book artist or Tarzan (Yeah…) to name a few. Ooo, and a reporter. I was a big fan of Tintin, still am!

A link to a favorite song:

Rohit Sawant’s fiction is forthcoming in The Twisted Book of Shadows and has appeared in Weirdbook, CultureCult Magazine and can be found inTranscendent, Sherlock Holmes: Adventures in the Realms of H.G. Wells and other anthologies. He lives in Mumbai, India. Enjoys sketching, films, and his favorite Batman is Kevin Conroy. You can find him at rohitsawantfiction.wordpress.com

Don’t forget to follow us on Amazon, so you can be notified the moment IN THE AIR hits stores.