I looked around the empty ice-rink. Even then, I knew I was in some intra-cranial world and that my eyes were bouncing from side to side under my lids, like an organic metronome keeping dream time.

My only company the diffused reflection glued to my boots as I walked gingerly, and I read shapes in the random patterns scrawled on the ice; the head of a dog, a torso, a base clef symbol.

I fell forward, landing with a hiss. I didn’t slip, more like someone yanked a rug from under my legs. On all fours, my hazy reflection grew dark. The white fog beneath the glassy floor cleared a little, and beyond it, a shadowy head bobbed up to the surface, hair billowing with the sluggishness of sea weeds. It was framed between my hands, which were spread like a director framing a shot. And from what I could make of the murky features, the maw of its mouth curled into a grin.

I remained transfixed until something broke my paralysis.

The floor sweated a drop of water. It swelled to the shape of an air balloon and dripped upwards, splashing onto my face right below my left eye.

I staggered back, the drop trickling down my cheek like a tear; the way it should roll in a sane world. A shrill whine of electrical feedback sliced the air, and everything around me sort of bent. I guess skewed would be a better way to put it, as if a white sheet bearing a projected scene were pulled at diagonal ends.

The rink transformed into a highway of ice, and I ran, breathless. The ground quivered, and my footfalls sent up small splashes of water.

I was alone in bed. I tried to discern the distant crooning; Olena’s hum from the shower.

I woke up just like the other times. No twitch. No scream. But when I let my head drop back on the pillow, it was damp.

Vapors of steam hung in the bathroom as I toweled myself dry.

On my way out, I glanced at my reflection. Before the ghostly blur could exit the edge of the frame, I retraced my step.

I stood facing my mirrored self, but my eyes only focused on parts of it, parts beyond the scrawled word the fresh steam had fogged into existence.

I couldn’t make sense of it, but my heart pounded as I slotted the letters into a sentence. I whispered it aloud just so it’d stop ringing in my head.

A tremor spiraled through me. I felt that any moment now, the mirror would melt, or crack, sending a silver sheet of water spouting from the fissure. And I would wake up. Serene. Safe.

But none of those things happened.

The fine haze that had covered the glass broke up into droplets now. Beads of water trickled down the surface, cutting in ruts of clarity, both in mirror and mind.

As the words lost their definition, a dull anger bubbled within me. I shared the roof with only one other person, and I was the last one to take a shower. 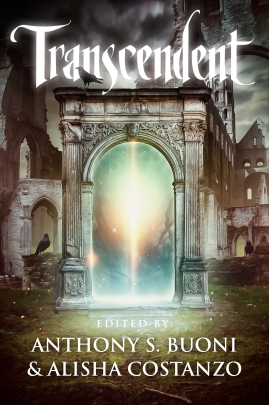 Rohit Sawant’s fiction is forthcoming in Weirdbook Magazine and has been featured in the anthologies On Fire, Down with the Fallen, Sherlock Holmes: Adventures in the Realms of H.G. Wells and elsewhere. He lives in Mumbai, India. Enjoys sketching, films, and his favorite Batman is Kevin Conroy.

Get your hands on the limited-edition hardback copy of TRANSCENDENT only at transmudanepress.com