I was nine when I saw the astronaut’s ghost out by Purcell’s farm, near the hay barn where my brother Jack died. But it wasn’t him I saw that night.

I was grounded at the time because of some trouble I’d gotten into at school. Basically, I’d unspooled all the bog roll I could find right into one of the toilet bowls and flushed. I don’t even remember why I did it. Probably boredom.

Funny thing is though, I’ll never forget the shock of seeing it backing up and flooding the place. Water just kept rising and rising, pouring over the edge. It just kept coming, splashing all over my shiny new Clarkes, and me thinking, Mam is going to kill me for getting my shoes wet.

You know that feeling you’ve probably only gotten as a kid? When you’re in real, proper trouble, where your stomach just knots, your fingers go tingly, and you’re about to pee fire? That was exactly how I felt standing there, unable to stop what I’d started.

Mam double-barreled as me as soon as she got me out of Mr. Hickey’s office. She didn’t even wait to get me home first. Just started, right there in the school car park, with all the kids in Miss Dunne’s junior infants class gawping out the window at us. Mam roaring her head off, me stood there pure embarrassed, telling me how mortified she was and that I, Elizabeth Margaret Shaw, had let her down so badly. What was I thinking? Didn’t I know she played bridge with Eileen McNamara, the vice-principal? How was she supposed to show her face next week, and so on? And on.

I was only ever Elizabeth Margaret Shaw when I was in serious trouble. Otherwise, it was plain old Lizzie to the parentals and Beth to everyone else.

So, anyway, there I was, the night I saw the astronaut’s ghost, having been under house arrest for more than a week with no T.V., no Internet, no nothing. You better believe, I was going mad.

And worst of all? Amy Purcell from up the road was having a sleep-over I just hadto be at. I pure flipped out. I mean how much more trouble could I get in? That’s what I thought. I climbed out the bedroom window, hopped the wall so the folks wouldn’t hear the gate creaking and took off up the road to Purcell’s farm as bold as brass. All nine-year-old brazen swagger on a dark country lane with not even the cows watching.

A pitch, black night in October, before the new houses were built, back when ours was actually in the countryside. And just before I came up to the Purcell’s, it appeared, cutting through the darkness like a slice of white static. A ghost. It glowed but didn’t cast any light, only lit itself up. Tilted its helmet to look at me, then started flashing in and out of existence, moving in these weird jerky twitches, like the girl from The Ring films. No noise, just a constant epileptic appearing and disappearing, the whole time pointing at its chest, at the letters above its heart. WBSIRE.

It’s only now, seven years later, that I’ve figured out what that means. Too late, out of time.

Apparently, Amy’s da found me standing in the lane by their barn, screaming my lungs out. Screaming about this ghost.

The parentals thought I’d been attacked or something much, much worse had happened. Obviously, everything checked out okay, and I think in the end, they figured I got spooked by a cow or some other animal moving about beyond in the fields, in the dark.

Back then, I used to watch a lot of old BBC shows online; Doctor Who, Day of The Triffids, Quartermass, loads of Hammer Horror movies. Twilight Zone, Tales of The Unexpected, that sort of thing; stuff I was probably far too young for. I was always drawing pictures of the monsters from them, so I reckon they thought my imagination went into overdrive, that I’d scared myself. Maybe if it was just a regular ghost I’d seen, they’d have thought it was Jack instead and believed me.

For ages after, when I’d get upset about it, Dad used to calm me down, saying it couldn’t have been an astronaut’s ghost. He said to become an astronaut you’d have to be a scientist like my brother Finn, who was off in America, and science doesn’t believe in ghosts, only logic. That’s what he’d say, and Mam’d always laugh. I tried to understand but didn’t find it funny. Now that I understand things, I actually find it scary. 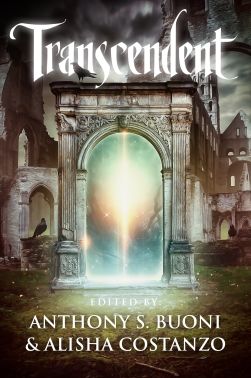 Originally from Thurles, County Tipperary, Ken McGrath now lives in an upside house in Dublin, Ireland with his wife. His fiction has appeared in Daily Science Fiction, Cirsova Magazine, Bards & Sages Quarterly, Liquid Imagination Magazine and The Arcanist among others. He has stories coming out in various avenues over the coming months.