On the verge of a new anthology, we are celebrating IN THE AIR with a behind the scenes view of authors and their stories. Here’s a look at Bill Davidson and his story “Easy as the Wind.”

The world is a simple and familiar one—a small town in Texas, but it could be anywhere in the world. There is only one difference, and again it’s not a complicated one. It’s very windy, simple as that. Not as in a hurricane or anything dramatic, but it never, ever lets up.

The idea came first, after a prolonged period of high wind. What if it kept going?

He hasn’t always been decent.

Which scene was the most difficult to write and why?

When Jason got hurt, and stayed hurt. It was just a broken bone, but there was no chance of getting it set right so I had a kid who would spend the rest of his (presumably short) life immobilized and in pain.

I first of all want to entertain, but I also want the reader to think twice about the way we are messing everything up, including the weather. We’ve built our world on assumptions about how it will behave and it would only take a very simple change to undo everything. It would be easy as the wind. 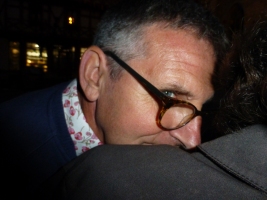 I homeschool my daughter, play tennis, and complain about sore legs.

Write. Then, do it some more.

A good yarn, filled with characters you can relate to and believe.

I wanted to be a writer.

My laptop. I can take it anywhere.

Flexible. If I’m writing in the first person, I try to get inside the head of whoever the protagonist is.

I thought the beautiful “Weather to Fly” by English band Elbow worked really well with the theme of this anthology from their album The Seldom Seen Kid. I suspect Elbow aren’t as well known in the US as they deserve to be, and when I googled “Elbow breaks USA,” I got a lot of interesting information, none relating to music.

Bill Davidson is a Scottish writer of mainly horror and fantasy. In the last few years, he has placed over thirty short stories with good publications around the world including Ellen Datlow’s Best Horror of the Year Anthology, Flame Tree, Hell Bound Books and Dark Lane Books. He has written three novels over the same time frame, but it’s harder finding publishers for the bigger stuff. Find him on billdavidsonwriting.com or @bill_davidson57

Don’t forget to follow us on Amazon, so you can be notified the moment IN THE AIR hits stores.