In our new author series, we’ll be offering a clairvoyant peek behind the veil of who and what makes up TRANSCENDENT. Here’s a glimpse at Alisha Costanzo and her story “The Glittering Pearls.”

I live in a realm of conspiracy theories, so the world gleamed from the current political climates and my deep-seated beliefs that people with power often hurt others with it and act as though they’re above the rest of us.

Doubly inspired, since my husband is a conspiracy king, “The Glittering Pearls” is based loosely off of his time as a solider, volunteering for every mission he could so that others didn’t have to. This common sacrificial thread in many of his stories and his propensity to absorb the guilt built-in to life—especially for me—in order to save others from it manifested the opening scene of a young man weighed down with other people’s sins.

Not a lot, to be honest. I did look up Comet, the pizza place central to the Pizza Gate scandal/conspiracy. I made it the Meteorite in my story, but I wanted the outside to realistically create a connection, so I Google-imaged some reference pictures.

Named after my husband, Jason, Jace is an Eater that is about to transition from his smaller suburban city to the capitol on his sixteenth birthday. He’s used to being avoided, and he’s resigned to his place in life. That he will die in the next fifteen years under the weight of the sins he’s absorbed. Until he meets V, a female Eater, that is.

It’s a dystopic version of our world, and the capitol, with a bit more magic. Large cities tend to collect sins and concentrated violence. As Jace purges sins in the capitol, they become more and more awful, and most of them revolve around V.

Conspiracy theories hold grains of truth at the least. At the most…well…I value keeping my head on my shoulders, so I suppose I should keep it at that, huh?

The highway spread its charcoal through the trees in an ever-curving vanishing point. 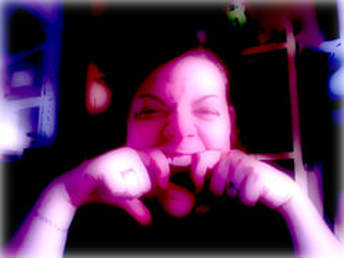 An Author Logo. Shawn at STK Kreations did an amazing job with my logo, and I love pasting it EVERYWHERE!

I mean, that immense debt that was ten years of college—undergrad and graduate—obviously was money well spent, too. I learned a shit load.

Okay, I’m selfish. I have three.

First, Seasons of Passage by Christopher Pike. I read almost every one of his books as a teen, and he tapped into a wave of creativity that I deeply connected with. Most prominently, The Last Vampire Series, but Seasons of Passage put words to ideas I’d had that I was unable to at the time.

Second, The Martian Chronicles by Ray Bradbury. As my first exposure to the man and newly exposed to Poe, I saw the connections and once more was transplanted somewhere that felt so familiar—like I belonged there.

Third, Feed by M.T. Anderson. If I were to write a deeply tragic story that nailed our current issues with the environment, food, school, language, consumerism, and the government. Man, this guy hit it all in a way that I would be proud to sign my name to. Maybe, it’s just all of the things that I love to rant about in the classroom. It brilliantly slays the romanticism in young people and makes them angry, at least in my experience. And since I love to light a fire in people and push them to think for themselves, the novel feels like a part of me, too.

Since I’ve always been a writer, this is hard for me to pin down, but I want to say when I was a sophomore in high school. It was the first time I finished a story—a terribly cliché futuristic story that foreshadowed the darkness that would shade all of my writing, even when teachers told me that I shouldn’t kill someone in every story.

Most of all, Alisha is passionate about satire and how it can be used as a tool for learning and criticism. Her stories are aware of themselves and determined not to give readers what they think they want.

A New York transplant, she lives in Oklahoma, teaches English and rhetoric at a local university, runs and edits at Transmundane Press, LLC, and navigates the crazy that comes with her husband, fifteen-year-old step son, eight cats, six lizards, six mice, three toads, two snakes, and a water turtle in the master bath, all confined under one roof.

Get your hands on the limited-edition hardback copy of TRANSCENDENTonly at transmudanepress.com