In our new author series, we’ll be offering a clairvoyant peek behind the veil of who and what makes up TRANSCENDENT. Here’s a glimpse at J. Robert Kane and his story “God is a Rabbit.”

My girlfriend Rebecca inspired my story. She has some truly fascinating stories about her graduate and post-graduate work in the field of Neuropharmacology.

I did have to do some research, as I have no experience with operating room procedure.  Becky served as a source in that regard, and I thank her!

Rebecca Foster is a grad student confronting her mortality. Conflicting feelings regarding the use of animals in her research may or may not play a role in her psychosis (if, indeed, it is a psychosis!)  The rabbits represent the vast majority of Rebecca’s experience, to date, with death.

For “God is a Rabbit,” the story insisted upon its setting. Other than perhaps a surgical hospital for animals, I can’t imagine another effectiveor believable setting.

If television has taught her anything, he’s probably speaking into a handheld digital recording device.  Likely a sleek, silver one, the sort rich folks order from catalogs with exotic-sounding names.

God Is A Rabbit, And We’re All Going To Die!

To date, I’d say the best money I’ve spent as a writerwould be my subscription to Grammarly.com. It serves as a great last-sweep before presenting a final draft.

My favorite writer is Stephen King, but my answer would have to be Isaac Asimov’s collection of short stories, I Robot.  The deceptively simple stories therein are deeply profound reflections upon what it means to be human.

I started taking my writing seriously three years and five months ago when I got sober.

I would want to fly because, well—who doesn’t dream of flying? 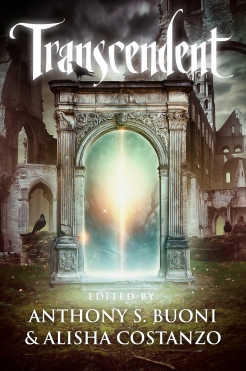 J. Robert Kane is a writer of horror and science-fiction.

Get your hands on the limited-edition hardback copy of TRANSCENDENT only at transmudanepress.com