The empty street loomed before her, quiet save for an unsettling rustling.

Leena quickened her steps, her stilettos clicking loudly on the sidewalk.

Where was that stupid cab?

Her phone app showed it waiting at the corner of First and Main.

But she’d turned the corner to another vacant street.

I’ll walk the two blocks to the subway.

A few people disappeared down the subway steps. At least she wasn’t the only one walking the streets at this time of night.

She passed stores, shut tight for the night, their iron bars a testament to the crime plaguing the city. To her right was the bookstore that she loved to frequent, filled floor to ceiling with books.

Tonight, it looked stark, lonely, and a little bit creepy.

As Leena hurried past, the chill from her nightmares gripped her.

She stopped. A blank wall separated the bookstore from the adjacent tacky souvenir shop.

No. I’m wide-awake. This is no dream, so this can’t be happening.

Leena chided herself for her stupid imagination.

But her legs wouldn’t move. Her feet stuck to the pavement. She struggled to free them. Finally, after a few panic-stricken moments, she slipped her feet out of her shoes.

Leena almost sobbed with relief, intent on sprinting toward the subway stairs.

But she found herself being dragged sideways.

Toward the space between the two stores.

Leena struggled, desperate to pull away.

No. This can’t be happening.

She opened her mouth to scream for help, but nothing came out. Tried to turn her head, to see if anyone was nearby who could help her. But she couldn’t move.

The wall separating the two establishments systematically pulled her body toward it.

The cold intensified as the wall disappeared and sucked her into the blackness again.

Inky blackness slid into her, right down to her cells. Blackness so complete, she couldn’t tell if her eyes were open or closed.

Goosebumps peppered her skin. She rubbed her arms and realized she could move again.

Against her better judgment, Leena took a step forward. Then another. The floor beneath her bare feet icy cold as she walked in an endless abyss. No sound, no light. Nothing.

There, and yet, not there.

As if she’d ceased to be.

Softly at first. Then louder.

On her left, a woman ran from a bear. Leena broke into a cold sweat from the terror in the woman’s eyes.

And, on her right, a man wrestled with a giant octopus. Leena shuddered as giant tentacles surrounded him.

And what was that? A girl. A teenager. Being held in midair by…was that a vampire?

Leena tried to scream for the creature to let go of the girl. Tried to move, to help her. But she couldn’t. A force field of some kind propelled her onward. Forward. Showing her more terrifying, macabre scenes of people in various stages of torment and agony.

And all she could do was watch.

The scenes blurred before her, like a disjointed movie that skipped from scene to scene, too quick to register.

A wave of utter despair washed over Leena.

She was stuck here. Wherever this was.

This in-between world of shade and shadow.

Of desolation and darkness. 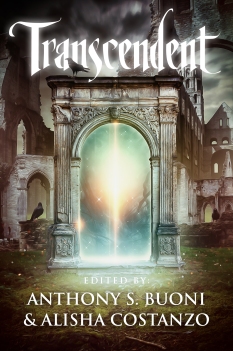 Lorraine grew up globally, constantly having to adapt to different cultures. Writing was her escape from the reality of always being the new girl in school. These days she writes for the pure joy of creating new stories instead of escapism. Her short stories have been published in sci-fi, fantasy, horror, and mystery/crime anthologies, and usually feature an Indian protagonist.