As one can assume, the story behind “An Ode,” which is about a road trip, is pretty flush with the story itself. Last summer, in 2017, when everybody was losing their mind over the totality eclipse, a group of my friends and I decided that we would take a trip to see it. Why not? None of us were doing anything that weekend. So, one of them determined—precisely how I don’t know—that the best spot to view it (the totality, I mean; we could have seen the regular eclipse from our backyards) without fighting crowds would be the parking lot of a McDonald’s in Williamston, South Carolina. Fine enough.

The plan was this: We would leave Friday night, arrive in South Carolina midday Saturday, then immediately head home so that we would arrive by Sunday morning, because we all had work and whatnot on Monday. Now, this sort of schedule is standard fare for a trucker and really nothing out of the ordinary for anyone with family a couple states away, but please bear in mind that we were not, and still are not, either of those things. It was a tall order for us. We described it as being a heaven-or-hell endeavor.

8 P.M. on Friday, we left Connecticut, and we drove for fourteen straight hours until we reached the McDonald’s at around two o’clock on Saturday, about a half hour before the eclipse if my memory serves me correctly. That first stretch, driving through the abyssal plain of Pennsylvania in the dead of night, was when I first realized that my friend in the driver’s seat looked monstrous from my angle, because it was one I’d never seen him from before. It hit me that our familiarity with things isn’t always all-encompassing and that those little unknown angles are the source of the most potent horror, even if my powers of description aren’t able to capture it. Every time we switched drivers I was given a new monster. This is one of only two real, factual aspects of the trip that I wrote into “An Ode,” besides the fact that truckers own the highways at night.

But really, there was nothing terrifying about the trip. It was a direct experience of the sublime, because the totality was nothing if not sublime, bookended by seemingly endless hours of furious driving fueled by energy drinks, bad jokes, and Waffle House waffles. It was monotonous. Our only entertainment was each other. We started out with high spirits, swilling coffee, weaving the worlds of fiction both created and continued by jokes among friends, laughing raucously into the night, all manner of fun, poetic stuff; but by its very bottom, by three in the morning or so in the dead center of Pennsylvania, we’d all kind of died.

The sun started to rise, the sky became the pre-dawn gray that almost presses down harder than starless black, and most of us weren’t even asleep, just laying there slumped over as the driver did his thing in silence. Then, we entered Virginia, and it happened like it did in “An Ode,” a revelation bordering on the divine. This is the point at which I think the story does a better job of telling itself than I could, so I guess we’ll all have to wait. Everything in it is there for the purpose of better communicating the feeling of entering Virginia: whether it all was successful is neither here nor there, but the thrust of things is that this isn’t the place for waxing poetics.

The Carolinas were dreadful, and we only drove through the whole of one and less than a tenth of the other. Their portions of the interstate were straight, flat, and clogged with traffic, a terribly disappointing follow-up to the scenic mountain route we took out of Virginia.

We entered the Carolinas at a downhill slant, rolling into a mind-numbing county faire of straightaways and roadwork, the clayey dirt sitting in little hills in the work-widened medians like new graves, some of them covered here and there with grass peach-fuzz from going too long untouched. The country wasn’t terribly beautiful, though we avoided cities. Traffic was hellish, and it only got more hellish as we neared our destination: The hours and hours spent in endless traffic, crawling through the mid-morning heat haze, was a different kind of madness, but not one that could or should be put to paper.

Everyone flocked to the narrow strip from which the totality eclipse could be viewed, the same as us. In the thickest of the traffic, only half for fun, I did a one-card dashboard tarot reading to see how the rest of the trip would go. I got the Wheel of Fortune reversed, and with it came the feeling that the deck was in one of its playful moods.

I said to the car, “Things might not go our way, but I’ll draw a clarification card to see if I can get any more specific info.”

The clarification was the Four of Swords. I knew what it meant, but I picked it up, showed it to the driver who glanced for a second and asked what was on it. It was a coffin, and I told him as much. I said to the car, laughing, “It means we’re going to die.” We all laughed deliriously because we believed it. Then, when he asked, I explained to the driver that the card itself meant that we were probably going to catch a break of some sort, but tarot isn’t just memorizing the most commonly-accepted meaning and using it every time. It helps me to think about it like I’m trying to have a conversation with a deck of cards that can only speak through its pictures. It always, always has perfect comedic timing, too. It can really read a room. Everyone knew that the more by-the-books reading was the correct one, that we would have bad luck but, ultimately, we would catch a break in between, but everyone played it up as a 50/50 chance between that and bad luck unto death for fun.

A half hour later, in another traffic jam, I was urged to do another clarification reading. I drew the Four of Swords again, and the entire car went nuts. Emphatically, the cards said we were going to catch a break: we were going to get some spiritual R&R after the grueling trial of the drive down and before the grueling drive back up. Emphatically, we all said, we were going to die down here. Our gusto was long gone, the last of it torn away by back-to-back full hour traffic jams, replaced with the dour, morbid boisterousness that fixated us on death, curses, and the apocalypse.

Getting to our destination in South Carolina was horrid, as traffic worsened the closer we got until it cleared up all at once, like an otherworldly storm at sea. But for all its speed in clearing, we were almost out of time: it was nearing eleven, and we had around an hour and a half’s worth of driving ahead of us. We were forced to race at a solid ninety miles per hour down back roads to get there, which should have been cathartic, but wasn’t.

It was the eclipse that gave us our energy back. I’m not going to try to describe it. However, I did another one-card reading—this time asking how the return trip would be—beneath the totality as a way of suffusing them with celestial power. I, who loves tabletop RPGs a bit too much, fancy the idea of having a real-life enchanted item, even if the tarot I do is amateurish and purely secular. I pulled the Eight of Wands and read it straight. I don’t think it implied that the going would be easier or faster, though that’s what a by-the-books person would say, but both I and the deck knew that traffic would no doubt be worse on the way out than it was coming down. If anything would carry us through, it would be our passion, our pure determination to see ourselves home and in our own beds.

Or, if determination and passion are words far too intense, too charged, too rosy and ideal, something like resignation, or the indelibility of the fact that we were 400 miles from home, and that those 400 miles would need to be crossed again before we could sleep.

That it would be resolve—though resolve is still too charged a word—or nothing, was my first hunch, and in tarot, the first impression is the one dripping, positively lambent with intuition, and thus, the best. The less thought the better. But thought or no, the almost-hopeful reading and the sheer beauty of the totality, the whole eclipse experience being better and stranger than any of us expected, gave us a short-lived burst of enthusiasm that carried us to a yard sale we’d seen on the way there, and then, finally, to a Waffle House, a last stop before we headed home. It was four hundred sleepless miles of road and nothing but crawling traffic until we hit Virginia.

When we got home, I fell onto the bed in my friend’s basement and slept for sixteen hours. 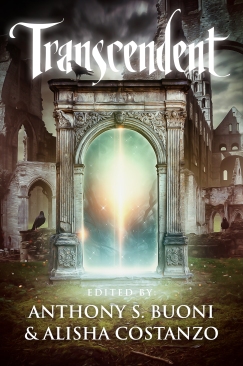 Noah is a college student and a writer, among other things. He loves spooky stuff, writing about spooky stuff, and, despite everything, going on road trips.