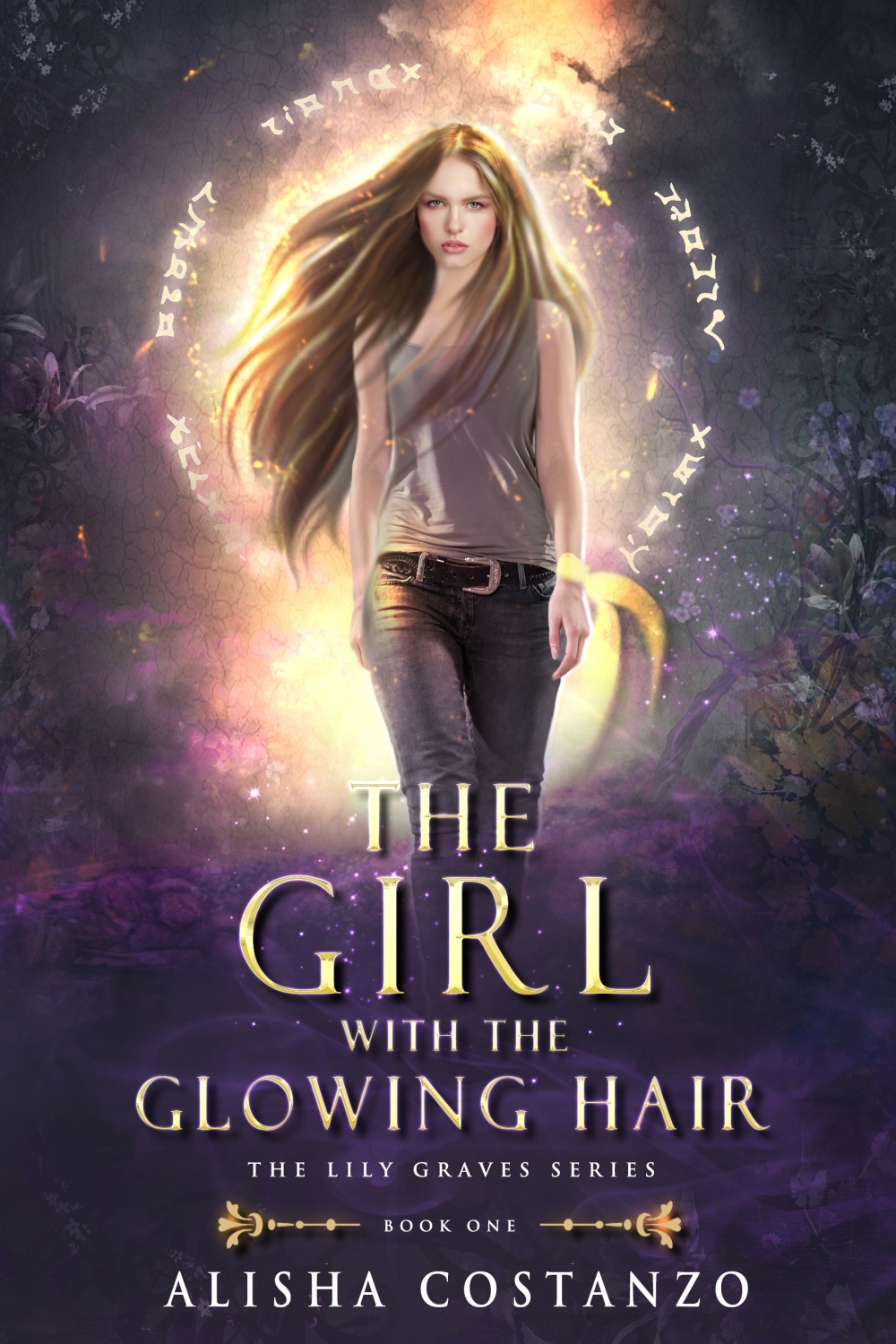 Lily is the daughter of Lucifer, a mother she’s never met.

When she’s laughed off the soccer field, Lily’s delivered to her FBI uncle and a new, paranormal, high school where she’ll be trained to keep other creatures in line.

Gaining few allies under the thumb of her obsessive mentor, she struggles to prove that something more is going on in their little town than anyone wants to admit.

If you like the innocence of Twilight, the snark from Buffy, and the wit of the Lunar Chronicles, you’ll be engrossed by Alisha Costanzo’s new dark and satirical YA series.

Read GIRL WITH THE GLOWING HAIR and fall into a world worse than hell—welcome back to high school.

Sleep didn’t befriend me, giving me fits and the sweats until I gave up and sat at my new desk in front of my new laptop. After an hour on my social media accounts, my old life advanced my apprehension, which propelled my boredom.

If it wouldn’t have woken Uncle Henry, I’d spend the rest of the night in the dead garden, working the soil and readying it for seeds. Maybe instead, I should get ahead on my homework. Because of the weirdo in the library, I still had five chapters of Dr. Jekyll and Mr. Hyde to read, a report for Biology to write up, and a chapter summary for History.

Pulling the work out of my bag and stacking it on my desk, I paused on the extra book from the library.

My fingers tapped against the cover. Ethology. What the heck is ethology?

Ethology studies the evolution of animal behaviors as adaptive traits. Aspects, such as communication, emotions, culture, learning, and sexuality, are re-examined as behaviors bred into a species for specific outcomes. This also helps a trainer encourage naturally occurring behaviors and discourage unfavorable behaviors within a genetic line. The study as a whole includes…

And it got boring. This seemed like something up Dad’s alley, but mine? The science wasn’t my thing, but the psychology of it might be.

Combine the two, I could hear dad saying. Granted, that probably referred to genes, but he stressed connecting my subjects in school. Uncle Henry did the same.

Maybe I could skim the thing.

Wispy teens—tall, short, pale, dark—whispered and weaved around their fellow students without pause or wobble.

Angels are bred of silence to go unnoticed as they influence the world. They whisper those words in the back of your consciousness. Angelic communities teach their young to dance as they walk to learn the grace of the world.

One tall brown girl in a shimmer dress tapped a locker closed with a spin as a sandy-haired boy stood from his own.

Some more powerful angels can all but disappear at will.

Red-headed twin boys scampered between a shy guy and a sweet girl eyeing one another. The twins flashed out of existence, and the couple fell into each other with soft giggles and pink cheeks before the twins appeared again behind them, smiling.

An athletic girl snatched them by their collars and set them straight again before they teetered together around the corner.

The counterpart of the angelic community, born demons are trained to openly and discreetly police the wayward via physical prowess and observational testing.

As the demon girl stomped past, her gaze sent me back into the lockers, clutching my book to my chest.

They often don’t need to communicate verbally as their thoughts manifest reactions in those around them.

A group of four to my right laughed—joyous and dangerous—clung to each other in a huddle of limbs. The guy in the middle smiled my way before he nodded them off.

Shifters build packs as they bond, traditionally with the alpha, whose goal it is to create a cohesive unit that cares for and protects each other. Litters are encouraged to express themselves openly both verbally and nonverbally, making their bonds stronger than most.

Gold and black stomped down the hall in formation. The leader, a tall, slender female with long pale legs, red lipstick, black bangs, and a bob flipped her hair as she approached. Covered in a stylish gold dress with black accents, her followers wore primarily black with gold accents. Each moved in sync with her.

Fey move in a hive-like group. They often mimic their leader and may develop a collective consciousness, which allows them to think and act as a single entity. This makes fey a near unstoppable force when threatened.

Cat-winged liner sharpened her eyes, stopping the hive around me, cornering me against my locker.

“Why are you staring, new girl?”

Embarrassment kissed my cheeks, and my explanation stuck to the roof of my mouth.

“Well?” The girl to her left asked—her second with her abundance of gold.

“I was just admiring your dress,” I told the leader. The garment was sleek and sexy without showing too much, and she wore it well. “My dad would never let me buy anything like that.”

Her laugh echoed through the others as she smiled at me. Shooing her girls away, she linked her arm with mine. “You’re quick. I like that.”

“What were you trying to figure out?” She stepped us forward, walking me towards my classroom. “Don’t be embarrassed, Lily.”

“How did you know my name?”

“Please. You’re the new girl, everyone knows who you are, especially since you ate with Evan Walker yesterday. Ballsy move.” Her thin fingers squeezed my arm to remind me she’d asked a question.

“I’ve been trying to guess the cliques. Studying.”

“Essentially, a stick in the mud. Don’t even get me started. REPpers aren’t well liked.”

“Oh.” That was the exact opposite of what I wanted.

“Well. The unity of your group and the bright colors resembled the fey.”

“Fey? Wow. Without the green skin and pointed nose. Without the straggly hair and warts. You need to keep studying because you are off. Talk about insulting. How would you like it if I mistook you for a chimera?” Her cheeks grew rosy under the pale powder on her face.

“And I’m a witch. The witch.” Her nails bit into my forearm.

Witches derive their power from their passion. Although encouraged to indulge themselves magically, pride can hinder their performance, so witches often remind their young to humble themselves.

“I didn’t mean any offense.”

She straightened her bangs with a huff. “Well. You should be more discerning, but I’ll forgive you this one time. Have you picked your extra-curriculars yet?”

“Good. Stay for art tonight. I’ll teach you a thing or two about who you’re dealing with.”

Kids filed into the classrooms around us in anticipation of the bell, and the head witch let go of me to make for her own class.

“Starr Black by the way. Be there by three.” She ran off, and the bell rang.

In Mythology, Miss Oscar read us three lost paradise mythologies: the Garden of Eden, the Garden of the Hesperides, and the Land of the Kachinas. Then, we talked about the similarities in the tales as a beginning to our “propensity of looking backward with fond eyes and how it clouds our vision of the future,” as Miss Oscar put it. Having her as a teacher everyday made this school worth the change.

Mrs. Ryker, on the other hand, made Ancient History the longest ninety minutes of my life. My brain shut down.

Tune in for mini-ethology lessons from Lily Graves’s world and sign up for an ARC of the first in her series, GIRL WITH THE GLOWING HAIR.